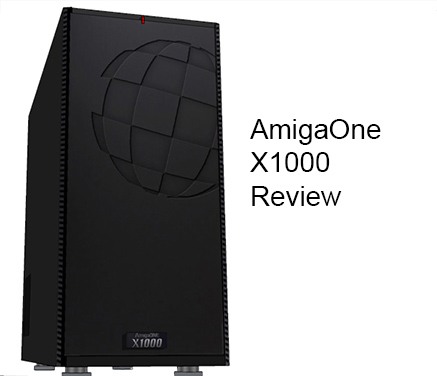 So I’ve had the system just a little over a week and I thought I’d post a very quick little review of my feeling on the system so far and getting back to an Amiga. At a latter point I might do a more in-depth review for my web site.

I have to say the build up and promotion for the new Amiga was done very well by A-eon, the Teaser site way back at the beginning of all this was a great time, weather some felt let down or didn’t like being tease it was great to see so much activity in the amiga community. It was also good to see support given to Amiga Future mag by allowing them to usually give news updates and progress of the project before anyone else. Not only that but A-eon and Hyperion supported and attended nearly every large Amiga show over the past two years and kept us updated with their email newsletter, I nearly gave them a perfect 5 out of 5 but I think the Summer 2010 tag line which I’m sure was put up in good faith at the time, was a little over optimistic.

So finally after much waiting we could order our AmigaONE systems, it was a tough decision, I wanted the product, I liked the case, I wanted a Os4 system for a while and I wanted to support A-eon/Trevor in what he was trying to do, the problem was just the cost, it was a lot of money specially in these tough finical and uncertain times its hard to justify spending this much on a hobby, on any hobby, but at the end of the day I just thought I’d be disappointed with anything less and I felt I would be missing out. I’m glad I started saving up when I did and partly glad it took this long to come out, because I just about had enough money saved. The order went well if an little unusual, I found it a little odd that Amigakit just didn’t add the product to their store like other products but instead created a special order page for it and the £1699 price tag without OS4 included was a bit of a odd decision, why not just £1799 advertised with OS4? It was also worryingly a long time after the order did I know for sure if I even got an AmigaONE system when rumors went around that they all sold out in a matter of hours this only made matters worst. I felt this could of been improved a bit and a little more communication about the status of the systems would of been nice during the wait. But I cant fault the fast delivery, the fast response to emails and the work AmigaKit have done on the case, accessories and behind the scenes.

I think the pictures speak for them selves

Boing Ball not included, but had to dig him out for this day. As well as the sunning case work, so pleased the boing ball logo was engraved and not just printed or sticked on. The little extras where nice to, like having a matching white backplate, having a white DVD drive, all nice touches. You also get a X1000 user guide, a technical manual on the nemo board and a AmigaOS user guide, there are also PDF copies of each on the system they are detailed enough to get you by and are nice to have. I cant really complain here, although the only thing that might have been nice would have been a nice custom AmigaONE box, I know its an extra expense and really unnecessary but it would of been a nice touch. Also I know some user had dents into their systems, I felt like the packaging was enough, the harddrive was a little lose in my system but I think that’s more down to the case hard drive bays, it doesn’t have screws but easy release bays, a bit too easy if you ask me, but all is fine I just hope other people don’t suffer with problems and it may be wise to open your case up when you get it just to be sure everything is set up right and still secure. One other thing is no cables came with the system, luckily enough I had a spare power cable and DVI cable, to be fair it didn’t say it would come with them, but again would of been nice.

Booting up and setting up.  Rating 5 out of 5

Booting up a new system for the first time is special, no matter what system it is, but I think for me this was extra special seeing the X1000 bios image and then the AmigaOS logo it was like a Welcome back feeling and a Never thought I’d see this moment feeling both at the same time.

Booting takes just under a minute, it be nice if it was faster, it but it beats my PC, and I might get a SSD drive for when OS4.2 comes out to speed things up a bit. You get the normal OS4 greeting screen and a basic set up, it was nice that the audio, monitor and Internet all worked out of the box, the wizard Internet setup is a little deceiving and could do with an update to allow Ethernet setup, as I found messing with this stoped my Internet working, but a quick look online and I found a few other people who had made the same mistakes and quickly got it sorted. Its a shame that not a few more apps are included by default, I suppose their is enough to get you started, TuneNet, AmiDVD, DVplayer, OWB, IBrowers, DirectoryOpus, RunInUAE, YAM, AmiFTP, pFTP, etc, are included but maybe a few games even if they where demo would of been nice.

So far on my AmigaONE system I have used the Internet, posted on forums, twitter, set up an account at AmigaNs.net, downloaded loads of apps and files from OS4 depot, sent and received emails via YAM, lesson to MP3’s and Internet Radio, Played CDs and DVDs, Watch some video files, Burnt off a back up copy of AmigaOS 4.1, Pulled Photos off my Phone, edited them, then uploaded them, had a quick go at editing music via Audio Evolution 4, Played a few classic games, Setup ScummVM and started playing Space Quest 5, Set up Amicyginx, Did a quick Srec test on the system, tried out Cinnamon Writer and then decided to see if I could write up a review using Timberwolf running Google Doc.

So typical everyday task for a computer and I am loving the fact that i can do all this on an Amiga system, however to get to this point has been one of much learning, you see the biggest problem i had is usually finding the require libs so apps can work, some are great and include everything you need and set up and go, but it is annoying when you come across an app that require a special lib and sometime dont even say what they need in the read me. DVplayer was one getting that to play DVD and then audio was intresting, and ScummVM was another program that had me on a little Easter egg hunt for a while. However part of me enjoys it, because setting up these various programs has got me back to learning Workbench and where things go, its not that hard and their is one great community I can ask if i get into trouble, I’ve experiences a few Guru and lock ups mainly when testing if a classic app can run in Os4, Wordworth 7 is one I checked recently which I thought did work, but doesn’t yet on my system anyway, I haven’t had time to see if their is a solution yet. So its not been smooth sailing but its been fun setting up my amiga and in kind of an odd way each time I’m going on my AmigaONE I’m usually settingi t up to do something new or learning something new about the system, which is pretty neat. So far I have to say speed wise the system seems fast enough, a little bit disappointed by Srec performance was hoping it could handle that better, but not to sure if I had all the right setting and codecs set up on the system, so may be able to set it up better. Another slight annoying thing is a few times I had Guru I’ve asked it to kill the process but the program just keeps running, it will let me carry on using the computer but most of the time it just eventually freeze up my system to point I cant even do resets so I started to learn if that happens it better to do a quick reset their and then. (which takes only about 15secs).

Worth it and final thoughts. Rating 4 out of 5

So was it worth it, I’d have to say its a wait and see, if I paid half the amount I would have to of said yes, absolutely I would of recommend it to every amiga user out their to save up and get one, I’m so glad I got one and I have been enjoying AmigaOS4 and slowly getting it set up to be a better and better machine. But it was (for me any way)an extra push to get this machine I completely understand the cost of designing a custom made machine and its nice that its a computer that i can say was “Designed in England, Made in England” (ok so the case was made in china) I think its true value and weather it was worth the extra push we will see over the next few years, what happens to the AmigaOs, will the X1000 and the netbook give us a bit more of a thriving market, will Xmos come in handy, will we get Dual core support, etc But no matter what happens I got more than enough stuff to be getting on with and enjoying on my new machine, so pleased Space Quest 5 works, that will keep me busy for a while. I think things can only get better and we must try and keep this party going and I would like to thank, A-eon, Amigakit, Hyperion and all involved in this project in making it happen.

Footnote: this doc was made on AmigaONE X1000, well nearly, the right click menu doesn’t seem to work so wasn’t able to spell check it and access other features, plus adding photo seem to fail on upload,  I could of got around this by uploaded them to Photobucket if I wanted and linked to them that way but decide to just add the Photos and little fix’s on my PC, I’m sure once Timberwolf gets its final release I hope I can fully create documents like this. MUIOWB google doc seem to get stuck at the loading screen. These are little problems you run into when your not running a mainstream supported computer platform, but believe me you can still have great fun on them.

Review by: Vincent Perkins aka AmigaNG