A500 Mini – Amiga Return to the High Street!

A500 Mini – Amiga Return to the High Street! 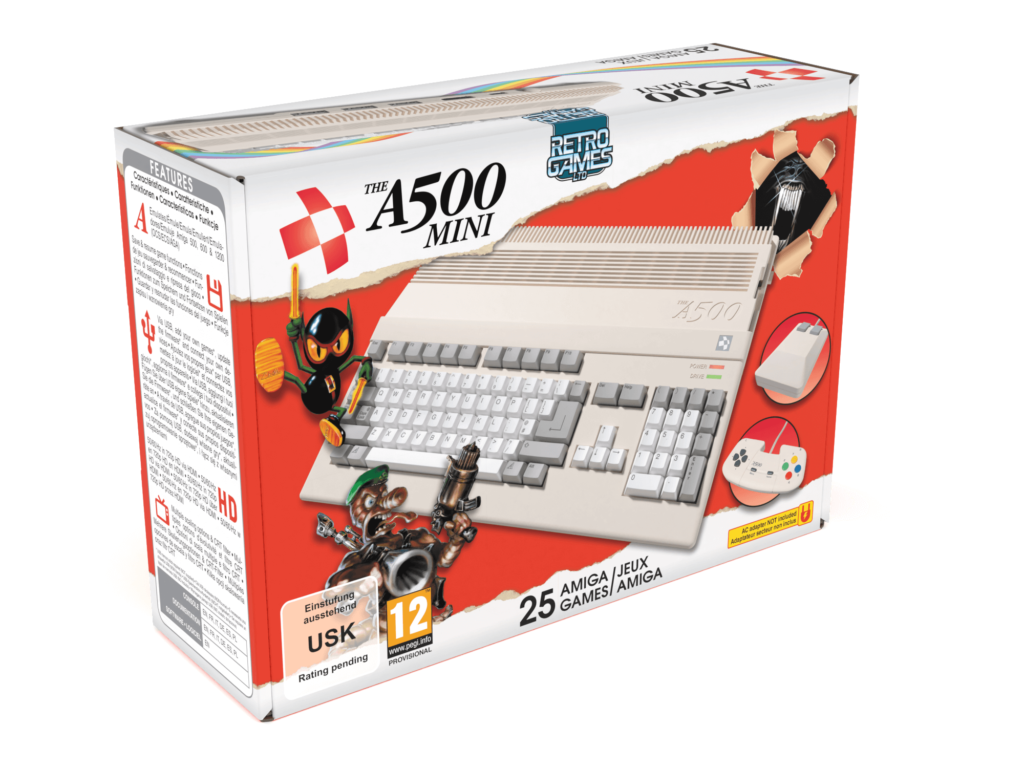 So recently in the Amiga world we had the exiting news that finally Amiga will be back on the high street, maybe not as a brand new Next Generation Amiga able to show PC & Mac users how computing should be done as some of us dream about, but as a Mini Amiga 500 computer to play some of classic Amiga games on. I done a video where I cover most of what we know so far

So firstly I thinks its not bad effort but I feel like it could of been a lot more, one line Retro Games LTD makes about the A500 Mini in its marketing is this “Now the other classic console are just toys!”. Well I wish this was true but the fact that it looks like it just comes with 25 games and nothing else make it feel like the Amiga was only a gaming system.

I run into this a lot, people who only remember the Amiga as a gaming platform, people overlook its Computer features! I feel this system does the same. Now dont get me wrong we dont know all the details yet, it might offer access to Amiga Workbench OS, but its looking unlikely. I kind of do get it, there aim is to create a easy off the shelf fun machine that can plug in and play, not a full relaunch of Amiga. Its for kids and grown ups who like playing games.

But I do feel this is a miss opportunity by Cloanto/Amiga and by the Pi Foundation. Why do I bring in the Pi into this, well there aim is stated on there site is “to put the power of computing and digital making into the hands of people all over the world”.

Many of the developers of the Pi are Amiga fans and just imagine if they where the ones making this product, having the same kind of device, out of the box runs a easy to use front end Amiga game station, like many Retro Pie systems do already. This could be one SD card, you could then have two more SD cards, one that boots into Raspberry Pi OS for people who want to explore that and a third SD card that had something like Amikit XE a fully setup Amiga OS, with maybe a few extra beginners guides stuff built in for new users and explained how the system works.

Some of the serious Amiga libary could be included, maybe they could of even teamed up with one of the Amiga mags (Amiga Future / Amiga Addict) to write a beginners guide magazine special to the world of Amiga. Sure this might of up the costs, but would it?

A Pi400 complete kit costs £90, that’s with a keyboard and a full Pi4 4Gb inside, so a slightly cut down version, with no keyboard as it be in the same kind of case as the A500 mini is in, it could be the 2GB model, could drop the two HDMI out puts to one, drop the Ethernet port, and even maybe drop the Gopins I think at the scale of the A500 mini is going to be made I bet they could of produce such a system sub £30.

They could of up the release price of the A500 mini to maybe £150 max to account for this slightly higher cost a board like this would of costs and the extra SD cards. But I think with the extra features that a Pi brings, like Wifi, Bluetooth, Raspberry Pi Compatibility etc, it would of been more than enough to get people on board and it really would make the other mini systems seem just toys!

With a system like this you really would be putting a computer into people hands not just a Toy gaming machine and this is where I feel this system has really missed the mark, unlike all the previous Mini Computers like C64, mini Nes, Mini PS1, mini Atari etc, Amiga platform kept going, it was a platform capable of connecting to the net, run full office apps, paint programs, photo editing, music making, playing videos and basically be a full computer.

Now I know there likely to be hacks to expand its use, already with news it will support WHDLoad games is great news and makes it a simple way for consumers to play Amiga games. I see no reason why you wont be able to run high end amiga workbench on the system. But just stop and think if it had a Pi4 system in it how much more this system could offered and empowered users. This is where I feel its a bit of missed opportunity.

Thats just my thought, who knows they might add AmigaOS stuff to the system and maybe in the future a full scale version would expand on its features, I still like the product and happy to see it happen, it just feel it could of been so much more with very little extra money or work really.