Since A-Cube stop producing the Sam motherboards and the high price points of the X1000 & X5000 there was calls for a low cost entry to the AmigaONE market. In 2015 A-eon announced the A1222, designed to be a low cost system based on the P1022 1.2Ghz CPU in a Micro ITX design. Development of the board began in late 2015 however due to the CPU design not featuring FPU instruction set AmigaOS4.1 would require a FPU emulator baked into the OS for it to run on the system. This is believed to have really slowed developments of the system, as well Hyperion again being in involved in a legal battle with Cloanto over AmigaOS rights, after they started developing AmigaOS3.1 updates, hasn't helped.

However in late 2017, a video by Hyperion showed the first boot of AmigaOS4.1 on the A1222, https://www.youtube.com/watch?v=fMSvxQIfq2w 6 months later in 2018, Beta testing boards where shipped out to test and it was hoped that towards the end of 2018 the A1222 would get released.

However key driver development was slow and it is believed that Hyperion got into financial difficulty in funding development of OS4, development went to a crawl pace. As a result a key component of AmigaOS, ExecSG changed ownership over to Trevor personally (CEO of A-Eon). This move and a new ExecSG dev team being set up it is hoped to speed up development of AmigaOS4.1 for A1222.

December 31, 2019 it was announced that pre-order would finally be taken for the system, a special triple AAA pack was put together which featured the new Enhancer Software V2.0 from A-EON Technology, "Amiga.org" mouse & mouse mat, "Personal Paint" for AmigaOS PPC and AmigaOS 68k, "ImageFX" for AmigaOS 3.x , A specially commissioned "AmigaSYS 35th Anniversary Edition", Digital copy of the "Viva Amiga Extended Remix" movie as soon as it is released, a Special "AAA display box" and pre-order special price of the A1222 for £349, this triple AAA pack was limited to 100 units, which all sold within a few days. People who got this pack will be offered the A1222 first.

Due to Covid-19 virus impact on china and the rest of the world the system launch was delayed.

At Amiwest 2020 it was revealed a new prototype board version 1.3 would be required to update obsolete components that was part of the original design. ACube (Sam / AmigaOne 500 developers) would help with the production of this new board. However a good side effect of the delay has allowed the AHI audio drivers to be completed and UBoot has been updated that makes the system boot quicker. ExecSG has also had a number of bug fixes, improvements and finally the ground work for multi-core support has begun.

June 6 2021 on Trevors Blog, he shared a new ACube produced A1222 motherboard picture. 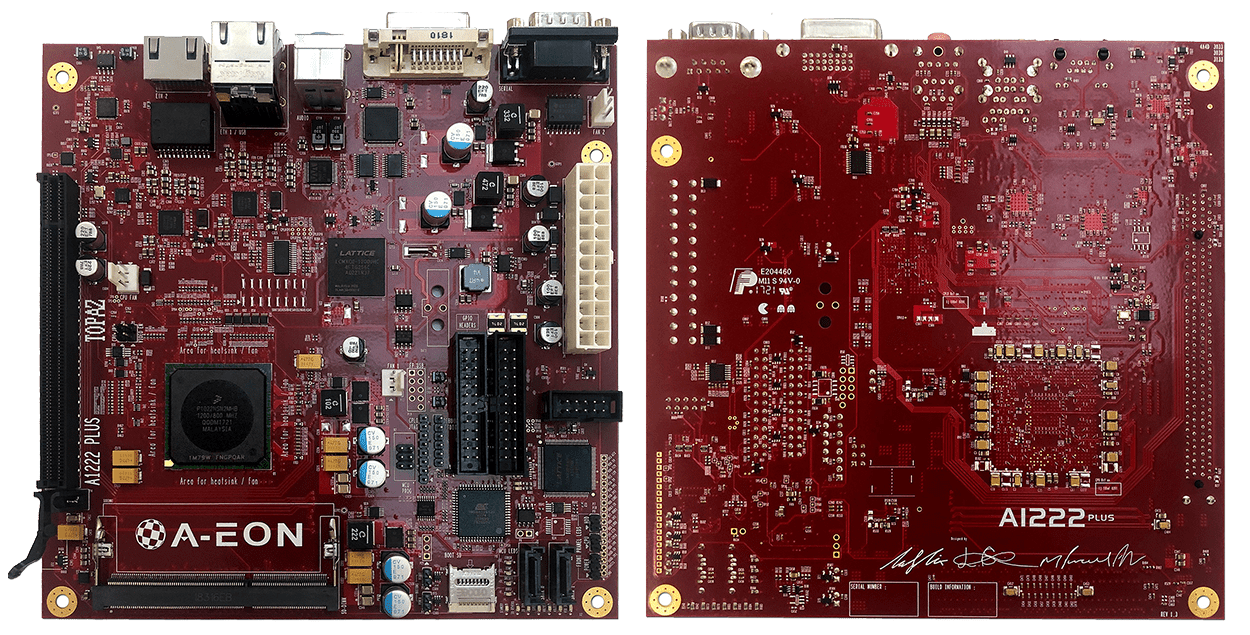 At Amiwest 2021 it was revealed that 7 beta boards have been made and shipped to key OS4 developers. Due to the board being very similar to Varisys design, OS4 is already booting on the system. Also at Amiwest 2021, a long demo was given to show off the performance of the A1222 and what impact FPU emulation has on the performance of certain tasks, view it here. Unfortunately no due date has been given.

The first 100 boards to be commercially available seem to be part of the Triple AAA pack, only sold by Amigakit, customer who ordered the AAA pack will be able to buy the A1222 at a reduce price of £350, after the first 100 boards the system will go up in price to £449.

It was previously announced that the system would come with AmigaOS4.1 ER edition (a Early Release) this was due to not all on board devices being supported.

However It appears A-Eon may have lost its license agreement with Hyperion for AmigaOS4. ( https://www.amiga-news.de/en/news/AN-2022-03-00099-EN.html ). Which may also go some way to explain the longer delay of the system launch.

A-Eon now appears to be the working on a new OS, System v54.