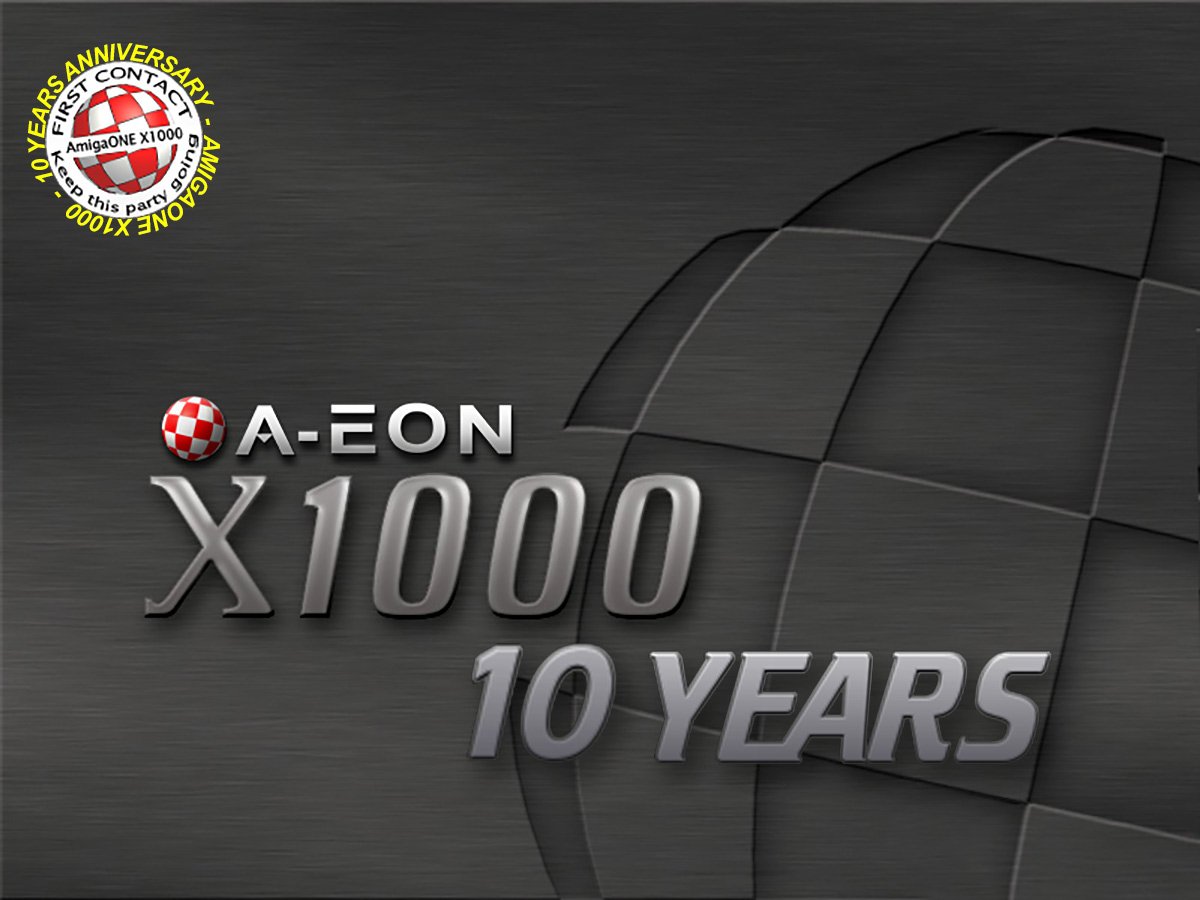 So just over 10 years ago, I bought a new Amiga, the AmigaOne x1000. It had a lot of promises, to push the Amiga platform to the next generation of computing. Dual core support, 64bit, cpu and this weird custom chip, Xmos. It all sounded very exciting, os4 also got Firefox port at this time and other promised app like open office for kids was promised to be on the horizon. Amiga sounded like it had a chance of a return, so with much debate and thinking it seemed like it was now or never to try and support this mini comeback I would get myself an AmigaOne x1000.

10 years on did the promises match the dream. I wrote a review also 10 years ago’s, re-reading I put this in its summary section of the review

“think its true value and weather it was worth the extra push we will see over the next few years, what happens to the AmigaOs, will the X1000 and the netbook give us a bit more of a thriving market, will Xmos come in handy, will we get Dual core support, etc” (X1000 Review)

I had completely forgotten that Hyperion even promised us a AmigaOs4 netbook, it really did feel like a mini comeback, now weather or not it was optimism, faith, hope etc that the things A-Eon & Hyperion promised would happen, but clearly we can see now that far from AmigaOS4.2 being ready for launch with the X1000 it’s nowhere to be seen 10 years on, and looking less and less likely to ever happen special now the OS seem to be split between the two parties and new lawsuit from New Amiga owners bring the future of Os4 into question.

So all the kind of big promises made with the X1000 kinda failed, os4.2, dual core support, xmos projects, OpenOffice etc. it’s a real shame these things didn’t happen, now I think partly the come back of AmigaONE platform was kinda ruined very early in x1000 development by Apple of all companies. They bought P.A Semi who where making the PPC chip to be used in the x1000 and who also promised future designs and future PPC development but with them being bought up, it left little supply of the cpu for the x1000 and the cost of the chips skyrocketed plus it was another nail in the coffin for PPC platform development.

So this likely really messed with the plans of A-Eon and maybe even Hyperion not only could they only make a small amount of the x1000 systems they would then have to make the decision to star over again and invest, spend time and resource on developing a successor the AmigaOne X5000, rather than make OS4.2. A great shame maybe it was the Amiga curse striking again.

But maybe without this happening you could make the argument that the AmigaOne x1000 project was doomed to fail from the start and staying in the PPC platform after it had been dropped by most major partners at this time in 2010/2011 was part of the problem. Plus the cost of a custom designed board and system was just too high to ever get more people to try it out, especially with the arrival of super low cost computer hardware like the Pi. I had to recheck the dates but the same day I got my X1000 was the same day raspberry Pi 1 came out, little did we know how much of an impact that would make on the computer market.

So maybe it was doomed but I’m an optimist. I believe os4 had a small chance of making a mini community, not the size of anything like Pc, Apple or even linux markets but big enough to support the odd software release and be a mini market for itself, but it never quite got there.

So I’m still left with the question after saying all that and the promises being broken was the system worth it? Well I have to say yes, (just) it made me come back to the Amiga scene more and get use to working in AmigaOs again. It got me back into enjoying programming on a system I could kind of understand how and why things work the way they do, no other system have I quite got that. After all Dual core support, 64bit, Xmos was not the most important things to me or any Amiga fan, the important part was does it feel like an Amiga and I can 100% say yes, OS4 feels like Amiga and the X1000 was best OS4 machine you could buy at the time.

The first 5 years I really enjoyed my Os4 time, getting to try out the past software I had missed and trying the new stuff that would come out for it, the community seemed very active around this time too and even though we didn’t get os4.2 we did get a number of improvements, os4.1 final edition added some much important features and A-eon (largely due to supply issue of older graphics card) put a lot of development resources into supporting modern graphics cards, adding more features in that area.

Plus even though the Firefox port failed to really do anything (a great shame) we did get an updated browser that could reliably run most websites for a time.

But time waits for no one and now unfortunately more and more websites do struggle to run properly, as time went on a lot of the momentum that the x1000 / x5000 seemed to bring to the os4 market has left. The low cost computer, Pi has seen a steady improvement and more Amiga fans found uses for this low cost platform to do some Amiga wizardly.

The last 5 years of my AmigaONE X1000 adventure has not been as good, the system has gotten more and more unstable, more and more issues have occurred maybe I been super unlucky with little software gremlins creeping in, I had a reset switch malfunction, RAM disk errors, dust issue (the system seems very sensitive to dust) cmos battery swap a few times, sata cable issues, os4 conflicts, gurus and grim reapers. The issue only got worse in the last two years to the point I didn’t want to bother with it, if I was going to just be spending my time fixing yet another issue or I’d randomly lose the work I got into (save often folks). Plus the slight decline in software releases and updates for OS4 has’nt help me get my intrest going again.

Plus over that time emulation of the AmigaOS has only improved ever more and pre-config builds like Amikit XE released in 2019 shows how far a classic os can be pushed and how fast emulation can be on modern day computers it feels as good as os4.

At the start of this year I decided I needed to either fix my x1000 of it grimilns for good or I might as well sell it, so I have kind of done that, the system is i feel 80% the way back to what it was, their is still the odd weird hard crashing on two setup I have made but i still have ideas and options to maybe try to get rid of them. So I will keep the machine at least for another year to see what happens.

One of my Tweets during this frustrating time

It’s frustrating to know there was a real attempt here to push the Amiga forward and for that I’m grateful, maybe the challenge was to high or maybe their was just too much optimism for the platform, I wish a little more openness of the state of OS4.2 and other project where made at the time. I do kinda get your damned if you do and don’t in this situation of weather to show what your working on so people know your working on something or just say silent until it ready so people don’t continuously moan about said project but then you run risk of people wondering if anything happening at all.

Like the last OS4 update was a surprise, I really did begin to think the project was dead until that came out in late 2020. Plus the new graphics updates to Warp3d nova and Video codecs support are nice to see. But again it feels like more support is targeted at X5000 now and already the X1000 is a forgotten platform.

So I’m pleased I got on this ride, it may not of been as advertised and failed some of its objective but it did make me dare to dream again of Amiga being a computer I could use day to day, a platform I enjoy so much, it a gave me that Amiga Next Generation dream, even if it was just for a time.

So at least the dice was rolled and attempt was made, I want to thank A-eon and Hyperion for its continued support of Amiga markets. Weather you agree with some of their decisions, ideas, visions, thats for another day, at least they built something which is more than many other projects have achieved in the past, AmigaMCC, Amiga Walker, BoXer etc so many tease / promised projects never hit the market, this did, so thank you for that and keeping the dream alive.