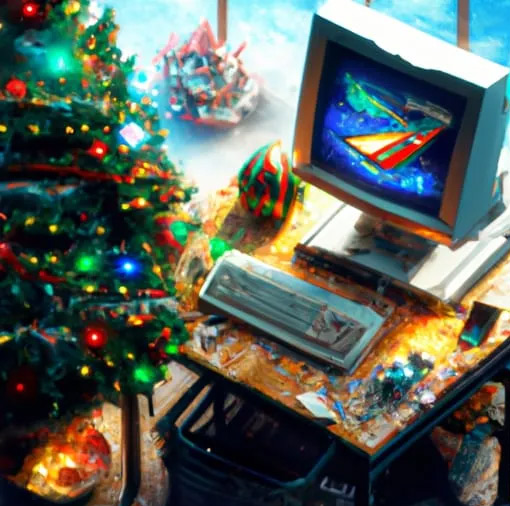 Not strictly about the Amiga, but its scary to think that Ai I think has finally really arrived, yes it kinda been improving over decades, but over the past year with image being able to be made from text entry and now we have open ai Chat Bot, which ask it question it will spit out and answer. Now i forgive you for thinking, well thats just a search engine dummy, whats so good about this? Well it can nearly do the work for you or find the exact answer, allowing you not having to search through the web page for the bit of info you wanted. But then its in its creation part which is more impressive, here is an Amiga related thing I asked it to create, so I asked it to Combine these games, lemmings, worms, sensible soccer, alien breed and another world and describe what the new game would be?

The new game would be called “Alien Lemming Soccer,” and it would combine elements from all of the games mentioned. In the game, players would control a team of lemmings who are armed with the weapons from Worms and tasked with playing a game of Sensible Soccer against a team of aliens from Alien Breed. The game would take place in the beautiful but dangerous world of Another World, with players navigating the treacherous terrain and avoiding deadly obstacles as they try to score goals. The game would be fast-paced and action-packed, with players using a combination of strategy and quick reflexes to come out on top. Overall, Alien Lemming Soccer would be a unique and exciting blend of different game genres, offering players a truly one-of-a-kind gaming experience.

The artwork is also from another Ai app when I just put in Alien Lemming soccer in Another World. This is nuts, I have a description of a game and the box art work done in 5 secs. Now its not quite there yet but you can get it to write programs, working programming, imagine in just maybe a few years time I will likely be able to ask it to make the game for me, and then the artwork and music. This is game changing tech and a little scary the huge problems this will bring in the job market and regulation this will require is scary and nuts.

The Chat bot does know Amiga coding as well, I got it show how to open a file with Amiga shell commands and AREXX and sure enough, it provided working code or example to how the task could work. This is going to help me with my Amiga programing. Of course it can do the modern day stuff, but where the fun in that.

Here is also a story i asked it to make about Amiga becoming the best platform again.

The year was 1985, and the world of personal computing was a chaotic place. IBM and its PC clones dominated the market, but a scrappy upstart called Amiga was starting to make a name for itself.

Amiga was founded by a group of engineers who were passionate about creating the best computer platform in the world. They poured all of their energy and resources into developing cutting-edge hardware and software for their new platform.

As Amiga’s products began to hit the market, they quickly gained a reputation for their superior performance and user-friendly design. The Amiga 1000, the company’s first computer, was a revolutionary machine that offered stunning graphics and sound capabilities, as well as a multitasking operating system that allowed users to run multiple programs at once.

The Amiga 1000 was an instant hit, and it quickly became the computer of choice for creative professionals, gamers, and home users alike. Amiga’s success attracted the attention of major companies like Electronic Arts, which released a string of successful games for the platform.

Over the next few years, Amiga continued to release new and improved computers, each one more advanced than the last. The Amiga 2000, 3000, and 4000 all offered even greater capabilities, and they became the go-to computers for those who demanded the best.

Amiga’s rise to the top didn’t go unnoticed by its competitors, and a fierce battle for market share ensued. But Amiga proved to be more than up to the challenge, and it continued to innovate and release new products that set the standard for personal computing.

By the early 1990s, Amiga had established itself as the best computer platform in the world. Its loyal user base was a testament to the company’s commitment to excellence, and Amiga continued to thrive for many years to come.

So i guess this blog post was just to share the new scary world we suddenly find ourself in. Ai is here.

So I leave with this Amiga Chritsmas tale, happy christmas

Once upon a time, on a cold and snowy Christmas Eve, a young boy named Timmy sat in front of his beloved Amiga computer, eagerly awaiting the arrival of Santa Claus. Timmy had been a good boy all year, and he hoped that Santa would bring him the latest and greatest Amiga games to play.

As the clock struck midnight, Timmy heard the sound of sleigh bells outside his window. He ran to the window and looked out to see Santa’s sleigh landing on the roof of his house. Timmy’s heart filled with excitement as he watched Santa climb down the chimney and enter his living room.

Timmy nodded eagerly and handed Santa a list of the games he wanted. Santa chuckled and reached into his bag, pulling out a pile of colorful game boxes. “I think I have just what you’re looking for, Timmy,” Santa said, handing the games to Timmy.

Timmy’s eyes lit up as he looked at the titles of the games: “Defender of the Crown,” “Impossible Mission,” and “Elite.” He had been wanting to play these games for months, and now he finally had the chance.

“Thank you, Santa!” Timmy exclaimed, giving Santa a hug. “I can’t wait to play these games!”

Santa chuckled and patted Timmy on the head. “I’m glad you like them, Timmy. And remember, the true spirit of Christmas is about spending time with loved ones and having fun together. So don’t forget to share these games with your friends and family.”

With that, Santa waved goodbye and climbed back up the chimney, leaving Timmy to enjoy his new games. Timmy spent the rest of Christmas Day playing his new Amiga games and having a blast. It was the best Christmas he had ever had, thanks to his beloved Amiga computer and the generosity of Santa Claus.