After years of waiting the Amiga community will finally get a new complete AmigaNG experience.
The AmigaONE X1000 was a machine commissioned by A-EON Technology, the company was set up for the sole purpose to develop and support AmigaOS4 software, it has a very close relationship with Hyperion and the key developers of the AmigaOS market. This will be the first new Amiga designed for the high end market for 17 years since A4000 launched back in 1992 and it is hoped that this computer can regenerate some interest in the Amiga market and lay the foundations for the Amiga platform to continue. Unlike the previous AmigaONE systems this system will not just be another motherboard that you will have to build up to a computer yourself but a whole complete computer system, with even a modded, branded computer case designed for the system. The main goal of the AmigaONE X1000 is to offer a high end and complete end user experience for Amiga enthusiasts right out of the box. To that end the hardware and operating system was extensively beta tested on this system to ensure that it offers the best AmigaOS4 platform to date, a team of a 100 beta testers have been selected to ensure this outcome. Only beta testers will be offered the motherboard separately, however the custom case, keyboard and mouse will be available individual to the beta testers as well as for people with old AmigaONE systems or Sams who may want their hardware in an official Amiga branded case. It is not known when the Boing Ball Fractal Tower will be available.

The potential price of the system has been one of much debate in the Amiga community, due to the fact that this is a specially designed motherboard for AmigaOS and offers some unique features and add to the fact of the small production quantity when compared to the PC markets the cost of such a system was always going to be high. The first production run named “First Contact“ system will be priced at £1699 and will be exclusively available from Amigakit (a partner with A-EON and a well establish long serving amiga online store) more details on this system below. The release date of the system has also been another well discuss topic in Amiga land, the reason is the original release date was intended for Summer 2010, but both OS and machine was only just in alpha stage at this point, it was hoped that at least beta testing would begin in 2010 however due to a required hardware revision and more extensive testing including a full Linux port being made for testing of the system it has caused some delay.

Finally in September 2011 Beta boards began shipping to beta testers and work could truly begin on AmigaOS4.2 development and testing for the machine. Beta testing ended up being a short affair this is due to the extended hardware development time the key OS developers have been able to much further develop the OS and the hardware has had quite significant testing in-house, far more than previous AmigaONE systems. Because of early reports and tests of the system have been very positive it was decided that rather than delay the release of the complete commercial system any longer for AmigaOS 4.2 the system would ship with AmigaOS4.1 update 5 with users getting a coupon for OS4.2 when it becomes available, it is also a good test of the market to see if the demand/interest is still their for such a high price system. Within 36 hours the first production run was sold out.

Due to the success a second production run was ordered to fulfill all orders, again Amigakit asked users to register interest, and it believed that the same set up as the First Contact run, this time details of the system was placed on AmigaKit web site and the special sub web site for the product got an update. The second production run also sold out and so enquiries were made on producing a third, but due to CPU cost rises due to limiting supply of chips, it was decided to begin development on another new motherboard with a much longer life span and much lower production cost than of the X1000, and only supply existing orders for the X1000. Its a slightly bitter end to the story of the X1000, but X1000 support is expected for a long time considering even classic AmigaOS PPC computers are still supported. Plus the X1000 does it main duty and pushes the platform forward to having to think about developing support for dual core cpu, more than 2gb of ram, 64bit platform, newer graphics cards and the machine now widely supports various Linux distributions thanks to the efforts of the Amiga community. So the X1000 will live on and I think it will be an important step in moving the platform forward. 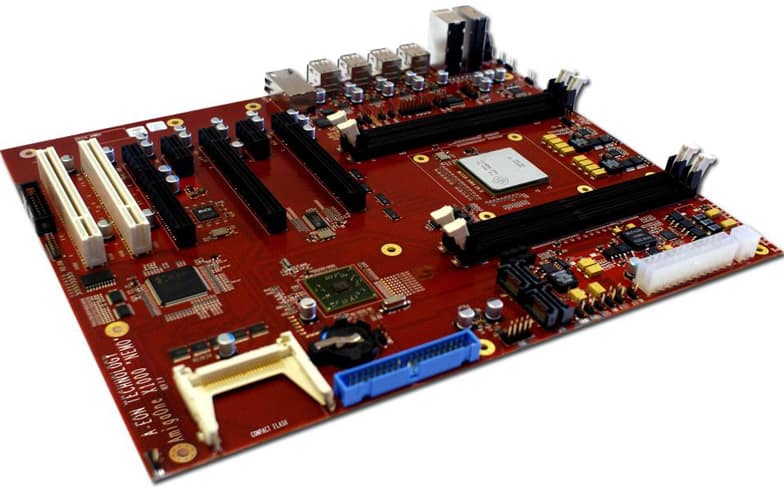 The system is powered by a PPC CPU the PWRficient Dual Core 64Bit PA6T-1682M processor the last developed cpu by P.A. Semi, clocked at 1.8Ghz and is ultra power efficient, it will be the only desktop computer shipped with the CPU. Another unique feature on the X1000 board is a chip named Xena, which is a co-processor 500MHz, dual-core XS1-L2 XMOS chip that is a event-driven processor, which means it can respond immediately to events such as external signals, rather than having to wait on an interrupt. This makes it appropriate to true real-time functions. Although it is still not clear as to how the chip will be used or accessed in AmigaOS it is an interesting addition to the motherboard. The chip can be expanded with a Xorro slot allowing direct access to Xena and possibly allowing additional Xmos core to be attached to the system. 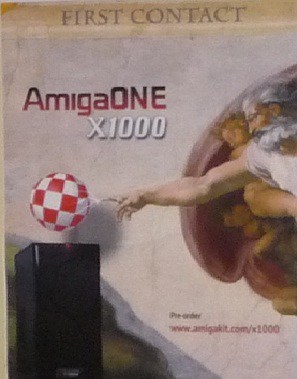 At Amiwest 2011 it was announced that finally per-orders would now be taken for the X1000. This first production run would be named “first contact“ systems, and would be a test to see if there was still demand for a system of this type in such a small market and difficult financial times. The system would also be released before AmigaOS4.2 would be complete instead users would get AmigaOS4.1u5 and offered a free upgrade to OS4.2 when available this would stop the delay of the system any longer. Included in the first contact systems is the nemo motherboard, the black boing ball case, 1Gb of Ram, a Radeon HD 4650 1Gb graphics card and a DVD-RW drive priced at £1699. Curiously it doesn't include a hard drive or AmigaOS4.1 as standard, it was said to be done to keep the cost low, but you also cant really use the machine or (at this moment) buy it without them from Amigakit. Adding the costs of the Hard Drive (a 1Tb SATA hard drive) and AmgaOS4.1 the cost of the system is £1857 this is without local taxs and shipping costs so the end figure crosses the £2000 mark, this was a little odd way to launch the system. Additionally you can change some of the specs like having a white boing ball case and 2Gb or even more Ram. You can also add Linux per-installed as an option and of course add the official AmigaONE keyboard and mouse accessories, however this will of course raise the costs of the system. The second and third production run is believed to fall within the First Contact Offer as well. Due to the higher costs of key components the system did not get a fourth production run, it is speculated that no more than 500 X1000 exist. 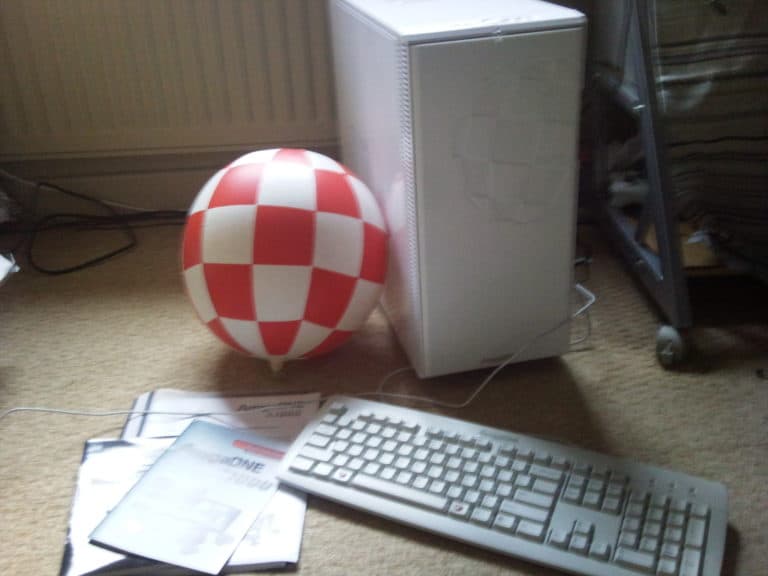 After two weeks of ownership I did a review and first thoughts that I have on the system so far, written up on Google Doc, using an AmigaONE X1000. You can view it on Google Docs or Here on our Blog

For the tenth anniversary I decided to write up a blog and my thoughts of the system over that time, you can read it here.

Amiwest 2011 = A-eon Speech on X1000
Boing Ball = Look at the white boing ball case
AmigaONE X1000 Unboxing = Opening up a complete white X1000 set up
Booting = What happens when you turn one of these things
Srec = Quick capture of the AmigaOS4 running on the X1000
Clusteruk demo1 = Demo of the Amigaone, Part one
Clusteruk demo2 = As Above, Part Two