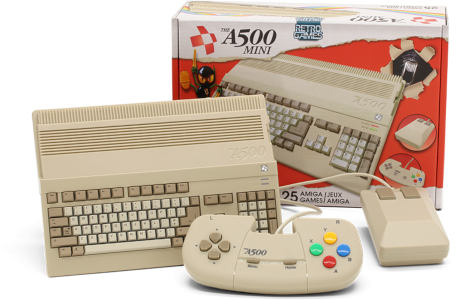 So I thought I’d do a quick review of the system, basically it what you expect really, it’s a well built mini replica of the Amiga A500, but missing one crucial thing out of the box, that is the  A500 was A COMPUTER!!!

Not just any computer but one of the best home computers, this A500 mini is nothing more than a gaming console (unless you hack it).However saying that I think most people who pick this up and play around with it will be happy with that, but I think this is the first thing you need to be aware of, this is more an Amiga CD32 than a full Amiga A500 experience. now i got that out of my system, on with the review.

The Case is well built and very accurate, it even simulates LCD lights and all the cables are in the beige white Amiga style which is a nice touch.

The controller is a little small and the choice of the Menu / Home buttons is a little odd, as Home feels where the Start button should be and so many times I have pressed this and not got the expected result. The Menu button should also usually bring up the virtual keyboard, but there seems to be an issue some times for that not always working, but I expect that to be fixed. This is also the button that can be remapped as the start button for cd32 titles that support that.

The Mouse again feels a little small and maybe over sensitive, but using it is maybe the most surprising thing about the whole experience. A mouse in this classic style does bring you that nostalgic feeling, even when I never owned one, it really feels like a real classic bit of tech.

So Accessories and Case wise, Retro Games ltd has done a solid job, I give them a 10 out of 10 for that, yes it would be nice to make them a little bigger and maybe a more one to one replica of the CD32 controller would of been nice I don’t think to many people are crying out for that and it was kinda of a surprise to see this done at all, there not many fans of the CD32 controller design, even within the Amiga community it is a oddly designed controller. Plus i know many prefer a joystick, but i actually dont mind the controller.

Hardware wise there are a few Sys info out now that show the system is slightly faster than a Pi3B, and is more than capable of running all the 68K classic Amiga software again I would give them 10 out 10 as in a way the hardware set out what it needed to do.

However you can do lot more with a Pi3 system, they are much cheaper, offer internet, more usb ports, sd card reader, more ram, giopins, a lot more hackable etc, so based on that I have to only give them only a 9 out of 10.

It would of been nice to maybe had internet on the device, so updates and software could be downloaded without the need of a another computer. an extra USB port would have been nice too, only because if you have a Controller, Mouse and usb stick all in use you got no room for a keyboard, but lucky it does support USB hubs.

One other nice touch perhaps they could have done was to make a USB port inside the floppy drive, so inserting a USB flash drive would feel more like inserting a floppy disk. I get modifying the style of the system for this might have been a bit too much, as likely the size of the drive might have had to be made bigger, I have already seen modders suggesting doing this.

But now we move on to the software side, the 25 games picked for Mini are maybe not the best of the best, it certainly has a few classics on here, Stunt Car Racer, Worms, Another World, Zool, Alien Breed and Speedball 2. But the pack is really missing one or two real Amiga classics. I get license costs and rights are difficult so I will kinda give them a break on the included titles. They are not bad, the best part about the machine is likely not locking the system to just these games and including WHDload, this really opens up expandability.

But again its odd that support for HDF & ADF couldn’t have been made too. (ADF support is being added in update) I do kind of get it. WHDload is a simple setup and likely is the simplest solution for the main target audience of users who just want the games to run and not worry about having to setup HDF settings or change ADF files mid gameplay. However maybe they could of had a toggle for advanced users to access features like this.

This leads me to the biggest issue I have with the machine. Thanks to hacks or other means, a full Amiga desktop system will run on this system, and maybe even more, but I cant help but feel this should have had this feature and should of been there from the start to do this.

Now maybe due to legal battle of the OS rights, or Cloanto wanting more money for Workbench or because this mini doesn’t feature a working keyboard they opted to ignore the serious side, I feel they should of put one serious app on there, a Paint program would be my choice as you don’t really need a keyboard, DPaint would again be my first choice but I understand the license costs for that with it being an EA owned might of been too much, but again, Cloanto produced likely the best competition to said package, PPaint.

A art package would of been another good old throwback to how art / painting programs where like in the 80s/90s, its something I would guess most Amiga fans remember as a art package was included in most Amiga packages, parents might of shown this to their kids of what they played around with as kids, they might of enjoyed the simplicity of this kind of paint package and produce some cool art work on it.

Retro game ltd could even held a competition for best art work produced on the mini for a small prize or something that might have encouraged the community to really show off what art work can be produced on a Amiga.

It would have also been another talking point for all the A500 mini reviews and Amiga exposure where getting at the moment, to remember the Amiga was more than just a gaming machine, instead it’s largely just about the Amiga games. Again I do appreciate that maybe this wasn’t the goal of the project but I still think it’s a missed opportunity that’s all.

I doubt outside the Amiga Community, people are aware of what can be done on a Amiga, and even less aware of how much the community has pushed it forwards. It would have been great show case Amiga serious side more and even shown off how modern looking an Amiga workbench can look, something like Amikit XE would of been a very nice showcase.

So is it worth it, well price its RRP is £129.99 at that price it is a little steep, when you compare it to other mini consoles that have come out before and especially when you compare it to a Pi systems, like the Pi400 with keyboard and mouse for £90 and that is slightly more powerful and can offer you an even better Amiga experience with presetups like Pimiga or Amikit XE. So with that in mind I feel it should be around the same price of £90 or less, lucky enough, it seems already companies are slowly lowering the price already, for a time it was £99.99 at the Game Collector ( https://www.thegamecollection.net/the-a500-mini?ff=5?tduid=23e5b6deb644d871a75ec1dbe997657b ) , I feel its a must buy for all fans of retro / amiga if it falls under £50, but at its current price its a 7 out of 10.

so overall i think its a solid product its just slightly frustrating to know with only some minor additions it would become an easy recommendation, thanks to some of the clever hacks that appeared, from giving you the full Amiga computer experience it should of really offered you out of the box and to even allowing you to run other emulators systems, it gotten even easy to recommend but i still think and have to say if you not fussed about the eye candy of the case and accessories and willing to do a little bit of work in setup then you can have a much more powerful amiga experience with lots more options with either a pi400 / pi4 at a lower cost.